Our Corona protective measures for you and our employees - continue reading 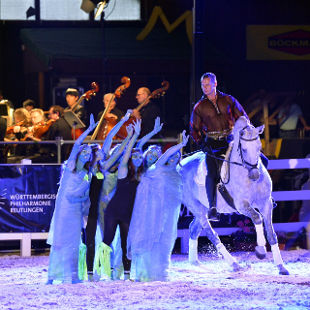 Marbach Classics - in the Haupt- and Landgestüt Marbach

After the open-air spectacle in the Marbach anniversary year, Marbach Classics, the dance on horseback with classical music, became a close-up concert again in the large stud riding hall: at record temperatures, the dance of the horses was tropical and hot, but celebrated by the audience Midsummer Night's Dream. Brilliantly moderated by ARD equestrian expert Carsten Sostmeier, this unique mixture of horse ballet and exquisite musical enjoyment was a cultural highlight - musically staged by the Württemberg Philharmonic Reutlingen under its chief conductor Ola Rudner.